After nearly half a century at the house on South Sierra Bonita Avenue in Los Angeles, Ossie Hill wanted to spruce up the two-bedroom home she and her late husband purchased in the early 1970s.

But the 86-year-old didn’t have the money.

Then her daughter, Cassina Edwards, had an idea, recalling radio ads for a local home-improvement contractor: “We can help you. Low income. No credit check. Government program. Give us a call.”

Now her mother, who receives $11,600 a year from Social Security and suffers from dementia, is struggling with a roughly $50,000 loan paid through a $5,500 annual tax assessment — an increasingly popular form of home-improvement financing known as PACE.

Edwards said the contractor explained that “a government program” would help the octogenarian afford the improvements, but never explained how the payments would work or warned them Hill could lose her house if payments were missed.

The first $5,500 bill last year came as a surprise, said Edwards, who helps manage her mother’s finances. With her mother unable to afford it, it has gone unpaid.

“I want my mother to keep her home. This is all she has,” Edwards said on a recent afternoon, as Hill sat next to her, eyes closed, head rested on her cane. “It’s pretty sad that they prey on people for your lack of knowledge. If you came in and were truthful about it, this would have never happened.”

Consumer groups, regulators and lawmakers are increasingly raising concerns about Property Assessed Clean Energy loan programs, which are authorized by governments but largely administered and funded by private lenders. In particular, the focus is on independent solar, plumbing and roofing contractors who pitch the loans and sign up consumers through online software — a system that’s drawn scrutiny but helped the industry grow aggressively.

The total amount lent for residential PACE projects topped $1.5 billion in 2016, up from $350 million just two years earlier, according to trade group PACENation. 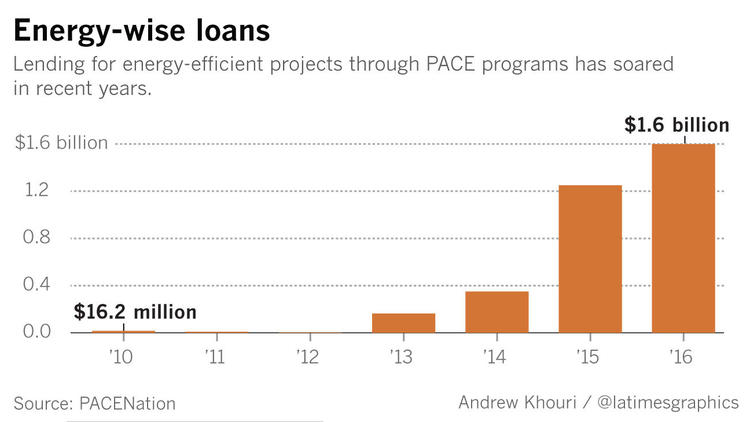 The loan programs are meant to serve a public good — allowing more people to finance solar and other energy-efficiency projects.

The loans are secured by a property lien and if unpaid a borrower can be foreclosed upon. Consumers put no money down and usually don’t pay anything for at least six months. Eligibility is largely based on home equity. Credit score and income are not a factor.

Many consumers simply know their loans as the HERO program, the name of the PACE program from the industry’s biggest lender, Renovate America in San Diego.

Critics say PACE can serve a worthy purpose, but worry too many consumers are agreeing to loans they don’t need or understand after being contacted by aggressive contractors, who often make cold calls or engage in door-to-door marketing.

According to lawsuits and interviews with borrowers and their advocates, some contractors are inflating the cost of their services and misrepresenting how much the loans cost or how they are paid back.

Contractors can get consumers approved on the spot, having them sign documents on a tablet computer — an experience advocates say can be confusing, particularly for elderly homeowners. Lenders then send final financing documents to homeowners for their signature, with the process taking a few hours to several days.

“They go out and push these sales and these projects without really any care whether people can actually afford it or not,” said David Hiller, a Pasadena attorney who has handled PACE cases for consumers. “It feels exactly like what was going on with mortgage lending precrisis.”

The three major private lenders — Renovate America, Renew Financial of Oakland and Ygrene Energy Fund of Petaluma, Calif., — say most of their customers come away happy and point to low default and delinquency rates as evidence the programs are working.

Cisco DeVries established the first PACE program last decade while working for the city of Berkeley, later founding Renew Financial, where he is the chief executive. He says PACE has “democratized clean energy” by allowing consumers without much cash and less-than-stellar credit to fix their homes.

Opinion: Democrats will avoid the real causes of the student loan crisis at Wednesday’s debate

Many Americans are feeling these 3 big financial stresses