By himself, Trump would have backed away from this disaster already. But Fox News is holding the nation hostage

An endgame for the current government shutdown has been apparent for a while now, if not from the first moment that Donald Trump shuttered much of the federal bureaucracy in an effort to blackmail Congress into giving him money for his border wall. Trump gives up the fight and offers some face-saving lie to his base about how the wall is already being built (as he has already claimed), and they pretend to believe him. There’s no other way this ends.

Trump is losing this fight. Polls show that Americans blame him for the shutdown and don’t really want his wall. He has very little support from the Republican Party, as evidenced by the fact that the shutdown began when Republicans controlled both house of Congress and still refused to give Trump his border wall money. Even immigration hawks, while saying supportive things in public, aren’t willing to go to the mat on this issue because they know it won’t do anything to slow down immigration by the people they consider undesirable. This is all over for Trump. It’s just a matter of when he admits it.

In other words, only one question remains: How long will Fox News draw out this shutdown?

Trump’s only real goal in this shutdown fight is to save face. That has been well-established. He’s not sincerely worried about breaking a campaign promise, since that’s largely what he has done since taking office. He’s repeatedly indicated that he’d be satisfied with a solution where he simply tells his followers he won and tweets out a bunch of photos of existing fencing while pretending that he built it. He has no compunction about flatly declaring victory even in the face of obvious defeat, because he knows his base voters — the only ones he cares about — will happily go along with any lie he tells, out of loyalty to him and their own unwillingness to admit they were wrong.

But there’s a problem, which started well before the shutdown. So far, Fox News simply won’t let Trump go down the “pretend you won and move on” route. The network, which Trump watches loyally and regards as a more important adviser than anyone on his actual White House own staff, has stuck to the false and racist claim that the U.S. is being invaded and only a wall will suffice to stop the problem. Fox hosts have also consistently minimized the impact of the government shutdown. And any time Trump gives even a whiff of softening his stance on this issue, the Fox talking heads, knowing that Trump is watching, will turn up the pressure, hinting that they will go after him hard if he backs down.

Fox News has spent the past three years demonstrating a willingness to elevate any silly lie Trump wants to tell. But when it comes to the border wall, for whatever reason, the network has strongly signaled its unwillingness to play along. If Trump tries to pretend he’s building a wall when he’s not, Fox is going to call him out on it. As long as that’s true, Trump, who cares about nothing quite as much as Fox News saying nice things about him, will be afraid to embrace the obvious strategy of just pretending he built a wall and moving on. 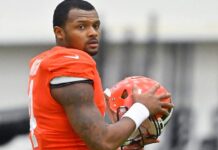