Insurance coverage for autonomous vehicles will bring $81 billion in new premiums to the insurance industry over the next eight years, according to a report from Accenture and Stevens Institute of Technology.

These revenues will be derived from three new coverages for risks related to the new technologies of vehicles, according to the report, Insuring Autonomous Vehicles: An $81 Billion Opportunity by 2025. The three new lines — cybersecurity, product (software and hardware) liability and public infrastructure insurance for autonomous vehicles — could generate a total of $81 billion by 2025, the authors contend.

This boost in premiums related to the auto sector and its technology will be followed long-term by a decline in auto insurance business.

The authors say insurers need to move quickly to add new capabilities in big data and analytics, as well as new actuarial models, in order to take advantage of the window of opportunity. After 2026, auto insurers will begin to see premiums drop due to the rollout of autonomous vehicles. As roads become safer and policies shift from consumers to autonomous vehicle manufacturers, insurers will see reduced demand for personal insurance, according to the report.

“Insurers are bracing for long-term declines in auto premiums as new and safer autonomous vehicles gain adoption,” said John Cusano, a senior managing director at Accenture and global head of the company’s Insurance practice. “However, our research suggests that auto premiums will increase before they decline on this trend, so insurers that can navigate the changing technology environment could win market share.”

The research found that cybersecurity insurance will be the greatest potential driver of new premiums, totaling $64 billion by 2025, followed by product liability insurance ($14 billion) and public infrastructure insurance ($3 billion).

These three new business lines include as described in the report are:

Cybersecurity: Protection against remote vehicle theft, unauthorized entry, ransomware and hijacking of vehicle controls, as well as coverage for identity theft, privacy breaches and the theft or misuse of personal data.

Public infrastructure: Insurance for cloud server systems that manage traffic and road networks, in addition to failure of external sensors and signals; and communication problems originating at the system level. 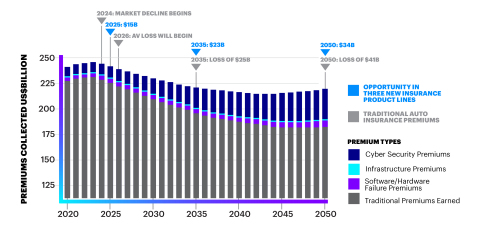 “Autonomous-vehicle technology will drive a significant shift in risk from human error to malicious third party, software, hardware and infrastructure risk,” said Chen Liu, co-author of the report and a research assistant at Stevens Institute of Technology. “Understanding and proactively responding to this anticipated enterprise transformation is imperative.”

“Forward-thinking insurers are already putting these new products at the top of their agenda as they look to capitalize on the first-mover advantage,” said Larry Karp, a co-author of the report and global insurance telematics lead in Accenture Mobility.

For the report, Stevens Institute of Technology, a private research university in Hoboken, New Jersey, developed several models to evaluate the impact of autonomous vehicle technology on the insurance industry. These models were then applied to different scenarios and insurance products based on parameters set by Accenture’s Insurance and Connected Transport teams. The research was conducted from October 2016 to March 2017.